If there is one thing we’ve all learned in the past months, it is that the future is impossible to predict. But consistent small adjustments can be extremely valuable in managing culture change that helps us adapt and thrive in an ever-evolving world.

It’s the same strategy used to turn the British cycling team into a powerhouse, first in the Olympics and then the Tour de France. The approach can be key to creating stronger teams in the workplace, says workplace expert Eric Termuende, who spent nearly a decade studying workplace culture and the future of work with top companies and associations from around the world.

The author of Rethink Work: Finding and Keeping the Right Talent and One-Degree Shift: Building an Intentional Future, Eric Termuende recently joined Haworth Connect to share his research, stories, and insights about the one-degree shifts leaders use in managing culture change to build incredible, high-performing teams.

The essence of a one-degree shift is acknowledging that a lot of things are going very well and just a small tweak is needed. In psychologically safe environments where everyone is trusted and there are “no bad ideas,” new ideas can be brought forward, and these impactful shifts can happen routinely.

The diversity of companies that make the list of great places to work shows there isn’t a universal best culture. However, the settings where workers thrive have a deep sense of trust.

“If we have a team that trusts each other—one that's rooted in this camaraderie, belonging, and psychological safety—that's when we can be the best version of ourselves,” Eric says.

What Every Leader Needs to Know About Reactivating Their Office Space 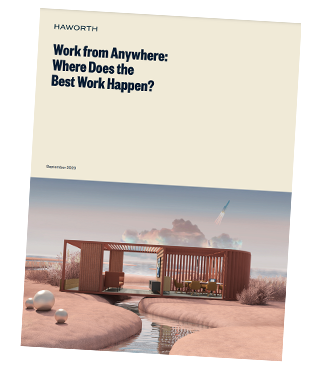 One example of this is the leadership approach of Sir Dave Brailsford, a former professional cycler who also holds a master’s degree in business. When he became head of British Cycling in 2002, the team had won just one gold medal in its 76-year history. By the 2008 Beijing Olympics, his squad won seven out of 10 gold medals available in track cycling. They repeated that achievement at the London Olympics in 2012. Brailsford was then recruited to lead Britain’s first professional cycling team, which went on to win three of four Tour de France events.

How did he do it? He focused on small rather than big changes by adopting a philosophy of continuous improvement through the aggregation of marginal gains. These changes ranged from better hand hygiene to reduce sickness, to bringing along pillows from home to improve the quality of sleep.

Brailsford created an environment of trust where everyone could contribute small changes, which was key to the team’s success.

“If we're allowed to solve meaningful problems—if we're allowed to experiment with motivation—engagement goes through the roof,” Eric says. “Why? Because we trust each other to put our ideas forward. We create this psychologically safe environment where we say, ‘Yeah, you can go ahead and try to experiment. And if it doesn't work, we're learning from it.’”

"If we can understand the power of what a one-degree shift really is and how we can build incredible teams—as unpredictable as the future might be—there's no doubt in my mind that we can thrive in it."

One way to begin the one-degree shift is by routinely asking these questions:

What should we start doing?

What should we stop doing?

What should we continue doing?

These questions can inspire teams to understand new practices from around the world, or drop a practice that is no longer beneficial and carve out space for something else.

For more insights from Eric Termuende about creating workplaces where people can thrive, watch his full Haworth Connect presentation. 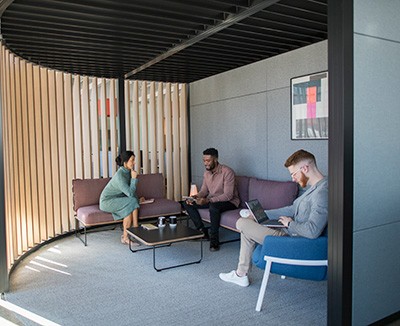