Plastics. They are embedded in the lives of billions around the world—from the cars we drive, to the beverage bottles we drink from, to the phones we use to stay connected. The affordability of synthetic materials is a key component to making these products accessible to the general public. Otherwise, they would be reserved for only the wealthiest of individuals. But what is the real cost of using so much plastic?

Over the years, plastic waste has accumulated in landfills and oceans—wreaking havoc on our various intertwined ecosystems. Due to their manmade nature, many plastics take centuries to degrade, and most of the plastic produced isn’t recycled.

Enter circular design and a sustainable shift towards a circular economy, which optimizes continual use of resources through a closed-loop system in with no waste. Working toward a circular economy is one of the biggest opportunities to design a sustainable future—and an essential part of our strategy of environmental stewardship at Haworth.

But, before we can get to a fully circular economy, we must not only recycle and reuse items, but find ways to “upcycle” our waste as well—transforming materials like discarded plastic from environmental hazard to new and different useful products.

Just How Big is the Plastic Waste Problem?
Mass production of plastics began about 60 years ago. National Geographic reported in 2018 that since the time that mass production began, about 8.3 billion metric tons of new plastic have been created. Of that figure, 6.3 billion metric tons have become waste. While it may seem like we’re better than we’ve ever been at recycling, only 9% of that plastic waste is being recycled. The vast majority ends up in landfills or simply discarded to litter our earth and oceans as potentially hazardous waste. Yet, we continued to produce more and more virgin plastic each year—rising from 2 million tons in 1950 to 381 million tons in 2015—in turn, compounding the waste problem.

With an estimated 12.7 million tons being dumped into our oceans each year, plastic waste has particularly harmful impacts on our marine ecosystems. As many as 1 million sea birds and 100,000 marine mammals die each year because of plastic debris. Sunlight, wind, and water break down larger pieces of plastic into tiny pieces. These “microplastics” look and smell like food to more than 800 species of marine animals, including sea turtles, seagulls, and dolphins. Whales can’t even distinguish a jellyfish from a floating plastic bag before it breaks down. Ingestion of all that plastic can cause perforated organs and clog the digestive tract so much that animals can no longer consume their natural food source, eventually killing them. Additionally, this plastic consumption permeates the entire food chain, affecting all species, including humans, with consequences we are only beginning to understand.

The SEAQUAL Initiative
Through the SEAQUAL Initiative, individuals, organizations, and companies have come together in the fight against pollution to clean our oceans and raise awareness of the issues caused by marine plastic. With the help of fishermen and other volunteers, the SEAQUAL community works to collect marine debris from the ocean and beaches before the plastics can degrade and become microplastic pieces.

The collected waste, however, is made up of a variety of materials, which makes it difficult to recycle. This is why past ocean cleanups often just moved the problem from the oceans to the earth—most of it ends up in landfills. The SEAQUAL Initiative sorts mixed waste into different material types. Metal and glass are recycled through traditional means, while organic and non-plastic materials are recycled or responsibly disposed of. The plastic portion is cleaned and transformed into a new type of raw material known as Upcycled Marine Plastic. The little plastic pellets can then be used to create beautiful, new, sustainable products. So far, the SEAQUAL Initiative has converted 99 tons of debris into Upcycled Marine Plastic, and brands and manufacturers from 46 countries have joined their fight against marine litter.

Oceanic: Polyester with a Purpose
Made from the SEAQUAL Initiative’s Upcycled Marine Plastic, combined with other post-consumer plastic water bottle waste from the land, SEAQUAL YARN brings to life possibilities for use in a multitude of applications with the creation of textiles. Almost identical in properties to virgin polyester, SEAQUAL YARN can be used weave fabrics for clothing and accessories, upholstery, and more.

Through a partnership with the SEAQUAL Initiative, textile house Camira uses SEAQUAL YARN to produce Oceanic, the latest in a series of recycled textile creations from the manufacturer. For every two kilograms (four meters) of Oceanic fabric, one kilogram of waste is removed from the ocean, and one meter of fabric equates to 26 plastic bottles. “We've always strived to break the traditional 'take-make-waste' model in favor of recycling, re-use, and cyclical loops where we upcycle waste inputs to create new fabric," a spokesperson from Camira says. 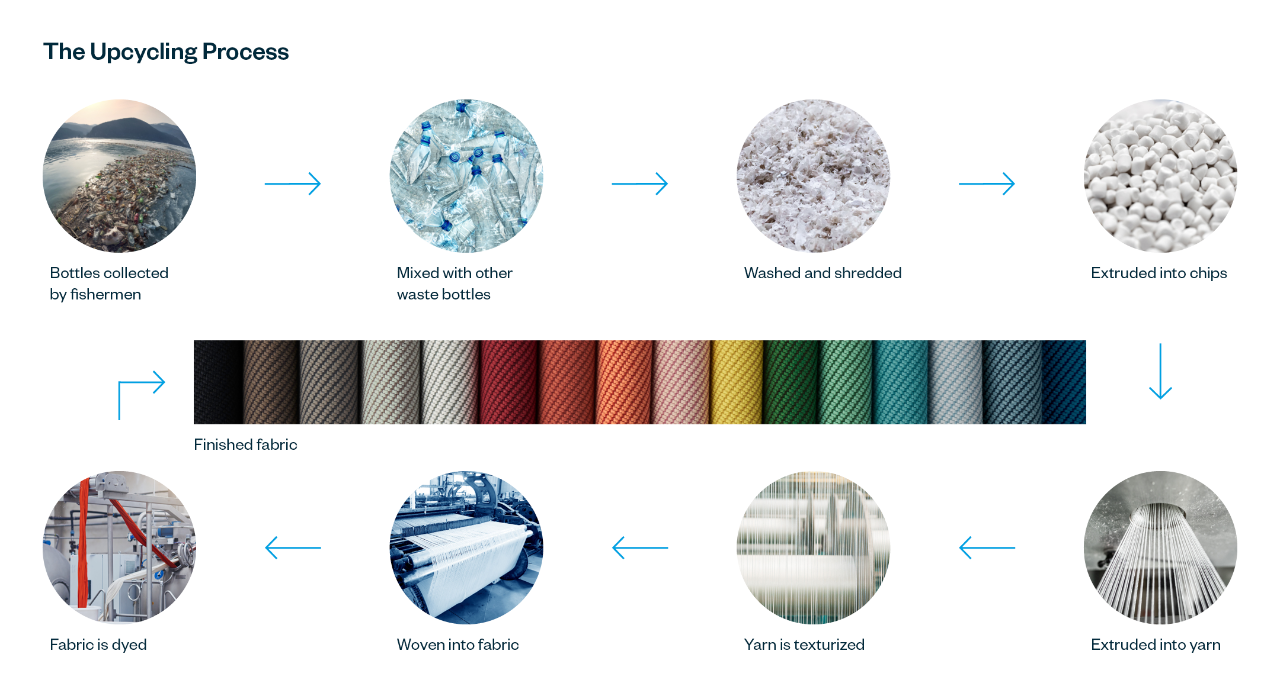 Not only is Oceanic sustainable, it’s durable and comes in 16 beautiful colors, which is why we’ve made it available as a standard upholstery selection on a variety of Haworth seating. As a design-led company focused on working toward a circular economy, Oceanic fits right into our materials mix as we consider the environmental, social, and economic impact of our products. And by 2025, 100% of new Haworth products will be designed using circular design principles.

“Oceanic is a great material because it is made of 100% post-consumer recycled plastic, from debris floating discarded in our seas. It adds a great purpose to the furniture we design, and it can represent a big step towards fully sustainable products.”

You can see our commitment to making the world better as soon as you walk into our corporate headquarters at One Haworth Center in Holland, Michigan, where Oceanic is on prominent display. “Our atrium currently has three lounge sofas and three side chairs upholstered in Oceanic,” notes Alexis Putman, Haworth’s Color, Materials, and Finishes Designer. “Together, that’s approximately 45 yards of Oceanic fabric used and equivalent to 1,170 plastic bottles pulled from the ocean, repurposed, and reused. You are not only seeing, but sitting on the next wave of sustainability in the workplace."

Learn more about our 2025 sustainability commitments and see the colors of Oceanic on our website.