When it comes to the workplace, teams do best in spaces that adapt to their varying needs. For an employee to do their work and do it well, companies that make people part of the space design process see big returns. Over the years, several companies—from Toyota to Google—began putting time and effort into creating moveable architectural elements and policies to adapt any workplace to meet employees’ needs.

When Google’s “Project Aristotle” started in 2012, it aimed to identify the variables for building the perfect team. Four years later, data showed that team performance and affectivity—or the emotional dimensions of work—have clear correlations to organizational success. The following 5 characteristics had the greatest impact on team performance.

Psychological Safety: Everyone feels safe in taking risks around their team members and that they won’t be embarrassed or punished for doing so.
Dependability: Everyone completes quality work on time.
Structure and Clarity: Everyone understands what their specific expectations— challenging yet attainable—are.
Meaning: Everyone has a sense of purpose in their work (e.g., financial security, supporting family, helping the team succeed, etc.).
Impact: Everyone sees that the result of their work actually contributes to the organization’s overall goals.

In short, the best teams are those where members listen to one another and show sensitivity to each other’s feelings and needs—which plays a role in employee performance.

“Project Aristotle” was undertaken the year that Google completed its widely reported $12.5 billion purchase of Motorola Mobility—a watershed for the company that would later transition from offering search and software services to being a software and hardware-maker. It was a moment of growth where Google turned toward manufacturing and began to observe and take "day-in-the-life" measurements of their employees' experiences. Google sought insight from their own People Analytics Department to understand how to create successful teams.

There is a fascination with team dynamics in the working world. When done well, the careful consideration and the quantification of team dynamics lead to enhanced productivity and organizational success. On the other hand, measuring team dynamics has the potential to garner criticism and concerns—often stemming from a long tradition in manufacturing during the industrial revolution where people were considered “cogs in the machine,” and more precisely from the discontent against alienating labor practices.

Leveraging teams and the social dynamics to restructure or reinvigorate dated work processes is not a new phenomenon. Back at Google—now under the parent company Alphabet, whose commodities range from search to life sciences—teams continue to be at the very center of not only management practices, but also the architectures and buildings they occupy. A well-defined team, given the appropriate amount of space to do work, will get the job done.

Three years after the start of “Project Aristotle,” the famed refurbishment of the former SGI Campus into the Googleplex led to the first mockups of Building 43. Clive Wilkinson’s glass tent system, a tent-like room big enough for four engineers to sit together in a single sound-insulated space, offered the small-group approach that Google adopted from its founders experience with Stanford’s Computer Science PhD group-work model.

Today, the group-work model remains a prevailing logic in the construction and organization of its buildings. The “Charleston East” project, for example, is the first building designed and built specifically for the company. What is most remarkable about this single terraced office level is how it uses a unique grid system. Large enough to fit four desks, the simple modular office grid is the perfect space for small group teamwork.

When designing workplaces—especially in the case of Google’s building and continued architectural efforts—teamwork is what makes a building work.

When Yawata Iron & Steel began with the slogan, “To give workers something to live for” as part of their quality control (QC) formula, a similar statement was given by Nikkeiren, a Japan Federation of Employer’s Association, when they advocated to create a system that linked “the hearts and minds of workers.” Inspirational words of affirmation and support like these were developed to create a sense of belonging—helping to pave a path for employees to feel more satisfied, and ultimately more efficient and productive.

When designing workplaces, creating a sense of shared identity through brand awareness is a powerful tool for enhancing organizational efficiency and effectiveness while simultaneously supporting employee well-being.

When Toyota factory workers began strike actions in 1950, their determination led to the unveiling of the extensively studied introduction of Quality Control (QC)—a concept later brought from the US to Japan by the Japan Productivity Center. Sound QC would later help shape the Kaizen system.

Through the 1960’s and 1970’s, the major struggle inside big companies was over the question of whether management or the workers themselves were best suited to organize the workforce. As Muto Ichiyo describes in an article about class struggle and technological innovation in Japan, finding a balance is key.

Smaller work circles coupled with sound QC have the power to support the labor force while controlling the production process. These practices exposed the capacity of the groups engaged in day-to-day work to rethink their processes in more insightful ways than managers, leading to enhanced productivity and employee well-being.

When designing workplaces, it is vital that designers include the perspectives, experiences, and needs of the employees who will ultimately work in the space.

When we put people first, design goes from good to great. 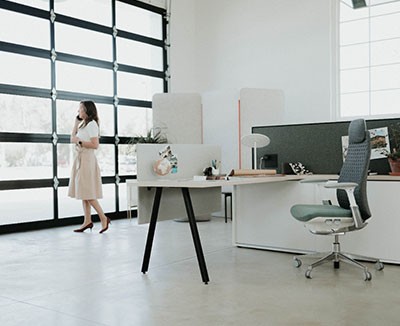