How Space Affects Interactions and the Ways We Work

Proxemics enhances comfort in the workspace

Even if you’ve never heard the term proxemics [prok-see-miks], you have a sense of what it means if you’ve ever encountered a close-talker. You know, the person who gets too close for comfort in conversation. Our perception of space affects our relationships. And, there are unwritten social norms that dictate how close or far we position ourselves physically. Since these norms affect how we work with each other, it’s worth taking a look at them and some of the research that’s been done on proxemics.

Proxemics in a Nutshell
Proxemics is how we think about and move through space. The term was coined by the cultural anthropologist Edward T. Hall, who is widely considered the father of the study of personal space.

The Perception of Space and the Role of Culture
According to Hall, our sense of space is a synthesis of many sensory inputs: visual, auditory, kinesthetic, olfactory, and thermal. In addition, our perceptions are shaped by the patterns of our culture.

“One of the things to remember when thinking about proxemics is that the actual distance between public, social, personal, and intimate space is rooted in overall culture,” Beck says. “However, these spaces are relative. In Western cultures, we tend to have a sense of really large personal space. In other cultures, those personal spaces can shrink down a little bit more.”

Let’s take a look at a few of these cultural differences.

In a published study comparing interpersonal distances around the globe, researchers found that people in warmer countries preferred closer distances with strangers compared to people who live in colder locales. In fact, this tendency has even been observed within the United States, where people living along warm latitudes exhibited closer contact behavior and touch than those who live in colder climates, according to the Journal of Cross-Cultural Psychology.

In the US, intimate space is typically only shared between couples and family members. Even when standing in a crowded line, Americans maintain an invisible bubble around themselves. In contrast, the Chinese perceive a problem if there is too much space between friends. It’s not uncommon for men to wrap an arm around another man’s shoulders, or for women to walk hand-in-hand. In public, Chinese people are used to being in much closer proximity to each other, even being in each other’s intimate space, according to a study that analyzed proxemics between Americans and Chinese.

Proxemics in the Workplace
To illustrate how proxemics affect the workplace, Beck cites this example: “Typically when you have a couch, there are three cushions and usually you only see two people sitting at it. Why isn’t there anybody sitting in the middle? Because it feels inappropriate—it feels like you’re invading someone’s space.”

To counter the awkwardness of a big gap on a sofa, our seating team designed Cabana Lounge. Think of it as a Goldilocks solution: not too big, not too small—just right.

“By creating a design that’s two-and-a-half seats, we’ve made it more efficient in terms of floor space while leaving enough space between for people to sit without feeling like they’re violating personal or intimate space,” Beck says. “The added feature of something like a table puts a barrier between them, making them more comfortable in face-to-face conversation even though they could reach out and touch each other.”

By bringing people together in closer proximity—but not so close that they feel awkward or threatened—lounge solutions like Cabana Lounge can foster feelings of trust and a spirit of collaboration. Providing both “me” and “we” spaces in a work environment enhances employee comfort and well-being.

“The actual distance between public, social, personal, and intimate space is rooted in overall culture. However, these spaces are relative. In Western culture, we tend to have a sense of really large personal space.” 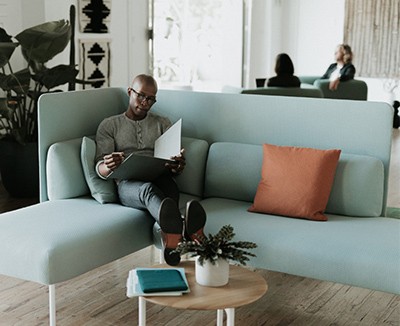